No incisions are needed for endometrial ablation. Your doctor inserts slender tools through the passageway between your vagina and uterus (cervix).

The tools vary, depending on the method used to ablate the endometrium. They might include extreme cold, heated fluids, microwave energy or high-energy radiofrequencies.

• Unusually heavy periods, sometimes defined as soaking a pad or tampon every two hours or less

To reduce menstrual bleeding, doctors generally start by prescribing medications or an intrauterine device (IUD). Endometrial ablation might be an option if these other treatments don’t help or if you’re not able to have other therapies.

Endometrial ablation generally isn’t recommended for postmenopausal women or women who have:

• Certain abnormalities of the uterus

• Cancer of the uterus, or an increased risk of uterine cancer

Complications of endometrial ablation are rare and can include:

• Heat or cold damage to nearby organs

• A puncture injury of the uterine wall from surgical instruments

In the weeks before the procedure, your doctor might:

• Check for cancer. A thin tube (catheter) is inserted through your cervix to obtain a small sample of your endometrium to be tested for cancer.

• Remove an IUD. Endometrial ablation isn’t performed with an IUD in place.

• Thin your endometrium. Some types of endometrial ablation are more successful when the uterine lining is thin. Your doctor might prescribe medications or perform a dilation and curettage (D&C), a procedure in which the doctor scrapes out the extra tissue.

As with any surgery, it’s normal to feel nervous about having a hysterectomy. Here’s what you can do to prepare:

• Gather information. Before the surgery, get all the information you need to feel confident about it. Ask your doctor and surgeon questions.

• Follow your doctor’s instructions about medication. Find out whether you should take your usual medications in the days before your hysterectomy. Be sure to tell your doctor about over-the-counter medications, dietary supplements or herbal preparations that you take.

• Arrange for help. Although you’re likely to recover sooner after a robotic hysterectomy than after an abdominal one, it still takes time. Ask someone to help you out at home for the first week or so.

What you can expect

The opening in your cervix needs to be widened (dilated) to allow for the passage of the instruments used in endometrial ablation. Dilation of your cervix can happen with medication or the insertion of a series of rods that gradually increase in diameter.

Endometrial ablation procedures vary by the method used to remove your endometrium. Options include:

• Electrosurgery. A slender scope is used to see inside the uterus. An instrument passed through the scope, such as a wire loop, is heated and used to carve furrows into the endometrium. Electrosurgery requires general anaesthesia. 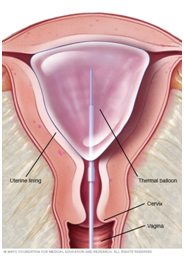 • Cryoablation. Extreme cold is used to create two or three ice balls that freeze and destroy the endometrium. Real-time ultrasound allows the doctor to track the progress of the ice balls. Each freeze cycle takes up to six minutes, and the number of cycles needed depends on the size and shape of your uterus.

• Free-flowing hot fluid. Heated saline fluid is circulated within the uterus for about 10 minutes. An advantage of this method is that it can be performed in women who have an irregular-shaped uterus from abnormal tissue growth — such as intracavity lesions or uterine fibroids — that distorts the uterus.

• Heated balloon. A balloon device is inserted through your cervix and then inflated with heated fluid. Depending on the type of balloon device, the procedure can take from two to 10 minutes.

• Microwave. A slender wand is inserted through the cervix. The wand emits microwaves, which heat the endometrial tissue. Treatment usually lasts three to five minutes.

• Cramps. You may have menstrual-like cramps for a few days. Over-the-counter medications such as ibuprofen or acetaminophen can help relieve cramping.

• Vaginal discharge. A watery discharge, mixed with blood, may occur for a few weeks. The discharge is typically heaviest for the first few days after the procedure.

• Frequent urination. You may need to pass urine more often during the first 24 hours after endometrial ablation.

It might take a few months to see the final results, but endometrial ablation usually reduces the amount of blood lost during menstruation. Most women will have lighter periods, and some will stop having periods entirely.

Endometrial ablation isn’t a sterilization procedure, so you should continue to use contraception. Pregnancy might still be possible, but it will likely be hazardous and end in miscarriage.