A Pap smear, also called a Pap test, is a procedure to test for cervical cancer in women.

A Pap smear involves collecting cells from your cervix — the lower, narrow end of your uterus that’s at the top of your vagina. 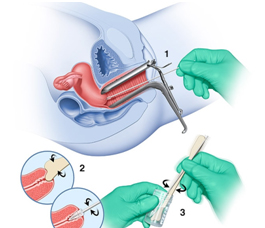 A Pap smear is used to screen for cervical cancer.

The Pap smear is usually done in conjunction with a pelvic exam. In women older than age 30, the Pap test may be combined with a test for human papillomavirus (HPV) — a common sexually transmitted infection that can cause cervical cancer. In some cases, the HPV test may be done instead of a Pap smear.

Who should have a Pap smear?

You and your doctor can decide when it’s time for you to begin Pap testing and how often you should have the test.

How often should a Pap smear be repeated?

Women age 30 and older can consider Pap testing every five years if the procedure is combined with testing for HPV. Or they might consider HPV testing instead of the Pap test.

If you have certain risk factors, your doctor may recommend more-frequent Pap smears, regardless of your age. These risk factors include:

• Exposure to diethylstilbestrol (DES) before birth

• Weakened immune system due to organ transplant, chemotherapy or chronic corticosteroid use

• A history of smoking

You and your doctor can discuss the benefits and risks of Pap smears and decide what’s best for you based on your risk factors.

Who can consider stopping Pap smears?

In certain situations a woman and her doctor may decide to end Pap testing, such as:

If your hysterectomy was performed for a noncancerous condition, such as uterine fibroids, you may be able to discontinue routine Pap smears.

But if your hysterectomy was for a precancerous or cancerous condition of the cervix, your doctor may recommend continuing routine Pap testing.

• Older age. Doctors generally agree that women can consider stopping routine Pap testing at age 65 if their previous tests for cervical cancer have been negative.

Discuss your options with your doctor and together you can decide what’s best for you based on your risk factors. If you’re sexually active with multiple partners, your doctor may recommend continuing Pap testing.

A Pap smear is a safe way to screen for cervical cancer. However, a Pap smear isn’t fool proof. It’s possible to receive false-negative results — meaning that the test indicates no abnormality, even though you do have abnormal cells.

• An inadequate collection of cells

• A small number of abnormal cells

Although it’s possible for abnormal cells to go undetected, time is on your side. Cervical cancer takes several years to develop. And if one test doesn’t detect the abnormal cells, the next test most likely will.

To ensure that your Pap smear is most effective, follow these tips prior to your test:

• Avoid intercourse, douching, or using any vaginal medicines or spermicidal foams, creams or jellies for two days before having a Pap smear, as these may wash away or obscure abnormal cells.

• Try not to schedule a Pap smear during your menstrual period. It’s best to avoid this time of your cycle, if possible.

What you can expect

During the Pap smear

A Pap smear is performed in your doctor’s office and takes only a few minutes. You may be asked to undress completely or only from the waist down.

You’ll lie down on your back on an exam table with your knees bent. Your heels rest in supports called stirrups.

Your doctor will gently insert an instrument called a speculum into your vagina. The speculum holds the walls of your vagina apart so that your doctor can easily see your cervix. Inserting the speculum may cause a sensation of pressure in your pelvic area.

Then your doctor will take samples of your cervical cells using a soft brush and a flat scraping device called a spatula. This usually doesn’t hurt. 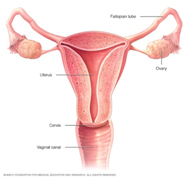 After the Pap smear

After your Pap smear, you can go about your day without restrictions.

Depending on the type of Pap testing you’re undergoing, your doctor transfers the cell sample collected from your cervix into a container holding a special liquid to preserve the sample (liquid-based Pap test) or onto a glass slide (conventional Pap smear).

The samples are transferred to a laboratory where they’re examined under a microscope to look for characteristics in the cells that indicate cancer or a precancerous condition.

Ask your doctor about when you can expect the results of your test.

A Pap smear can alert your doctor to the presence of suspicious cells that need further testing.

If only normal cervical cells were discovered during your Pap smear, you’re said to have a negative result. You won’t need any further treatment or testing until you’re due for your next Pap smear and pelvic exam.

With the liquid-based test, your doctor can reanalyze the sample to check for the presence of viruses known to promote the development of cancer, such as some types of human papillomavirus (HPV).

• Squamous intraepithelial lesion. This term is used to indicate that the cells collected from the Pap smear may be precancerous.

If the changes are low grade, it means the size, shape and other characteristics of the cells suggest that if a precancerous lesion is present, it’s likely to be years away from becoming a cancer.

If the changes are high grade, there’s a greater chance that the lesion may develop into cancer much sooner. Additional diagnostic testing is necessary.

Further testing is needed to determine the source of the abnormal cells and their significance.

• Squamous cell cancer or adenocarcinoma cells. This result means the cells collected for the Pap smear appear so abnormal that the pathologist is almost certain a cancer is present.

If your Pap smear is abnormal, your doctor may perform a procedure called colposcopy using a special magnifying instrument (colposcope) to examine the tissues of the cervix, vagina and vulva.

Your doctor also may take a tissue sample (biopsy) from any areas that appear abnormal. The tissue sample is then sent to a laboratory for analysis and a definitive diagnosis.